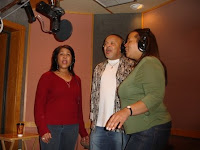 Now the dust has cleared before my eyes and I am back down to Earth, I thought it would be appropriate to post a snippet of one of the songs recorded in March at the session. This song called 'Tell me (Crying over You)' was intended to be one of those Detroit style songs featuring revered session musicians who would have been on hundreds of non Motown Detroit recordings. When I wrote the song, in my mind I pictured Uriel Jones on drums and the likes of Dennis Coffey and Bob Babbit on the session and imagined it was around 1968/9. I also visualised Spyder Turner singing lead vocals and as the song matured and we approached nearer to the session, I realised all four would be performing on the recordings in Studio A! Of course, just as important as back in the day, there would a selection of other prized musicians taking part.
For soul fans who like those obscure recordings that surface from Detroit, I wanted to not only pay homage to the musicians, artists and arrangers in Detroit, but to the fans in the UK and now the world who have a passion for this music too. Without them, I am sure my journey would have been different, but their commitment to this style of music over this long period of time is worth mentioning. They too are an inspiration and must not be overlooked when we speak about Detroit's great soul producing years. Listen here to a few seconds of the track:

Tell me (Crying over You)

Remember there are no synths on this or any of the other songs recorded in the studio. There were real horns and vibes which give the song a great retro quality feel. If anybody is interested, there is an article in the Detroit News this week about the session:
http://www.detnews.com/apps/pbcs.dll/article?AID=/20080412/ENT04/804120363
There are photos and an interesting video clip during the studio recording of 'Suddenly there's you'. Also it is time to mention the wonderful camaraderie in the studio. Taking my demo material and turning them into something of worth was a very professional affair. What I learnt was how writers, singers, arrangers and producers interact and collaborate together. With that in mind Spyder came up with some great lyric improvements on 'Tell me (crying over you)', which we implemented into the song. This means the writing credits will include Spyder, which I am thrilled about. To have my name associated with talent like this leaves me speechless (which is very unusual at the best of times). Also, Pree came up with a great improvement on 'Suddenly there's you'. She explained what she had done, and the new lyric flows just like a delicious Burgundy! What I must insist on is the true power in their voices on the session. This is their expertise and passion and it shows. Wait 'til you hear the full songs in a better bandwidth.
And I must mention the fantastic solos performed on three of the tracks. Dennis Coffey did a wonderful guitar solo on 'Tell me (crying over you)', and George Katsakis and Gil Bridges did sax solos on 'Detroit (city by the river) and 'Glory Fleeting'. I think the guitar solo Dennis did has mileage to be a good hook in the song, a virtuoso performance that will become historical and discussed, and my wife said she wanted it has her ring tone on her mobile phone! She thinks it's the best part of the song ha ha! Also the wonderful backing vocals included Spyders daughter Gayle Butts! Absolutely out of this world. I must also mention bass guitarist Bob Babbit who agreed to come on the session. When you eventually hear 'Tell me', towards the end of the song he starts to play just like you would expect from one of the worlds premier bass players. He was dancing up and down the frets, if that is the right expression, and to hear that on something that was created as a midi demo in 2004, just took my breath away.
Please check out my favourite links on the right hand side to read profiles of those who may have been involved with the session.
Stay tuned...
Posted by Carl Dixon at 20:10