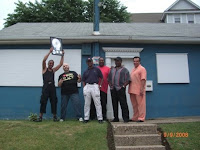 Last week was so frustrating. After 3 wonderful weeks in the studio with legendary writer, musician and producer Bobby Eli, I came home arriving after a night flight from Philadelphia last Saturday morning, with only one day before I returned to work for 4 x 12 hour gruelling shifts starting at 7am. This meant with the jet lag and excitement of returning home with some great rough cuts, I was frustrated because I could not spend time reflecting what I had actually done and post on my blog. Plus I was exhausted. Never before have I fallen asleep on the couch with my eyes open! It happened twice! So what does that say??

The above photo sums up the sound of Philadelphia: Earl Young, Bobby Eli, Dennis Harris, Rickie Hicks, Jimmy Williams and T G Conway were the rhythm section that laid down the tracks in the studio! Over two days the guys crafted the songs to their high standards by examining the demos and working out what would be best to make the songs flow with that typical Philly groove. The passion these people displayed was why, I think, so many great records came out the city in the past. They exchanged ideas and I think by the end of day two, wanted to stay and do more. I was and still indebted to these people. They have encouraged me for many reasons to try and emulate them. Now I know why I cannot, their genius says it all.

Bobby's attention to detail in the studio is clearly one of the reasons his work is admired by so many, not only the musical side of things but the technical studio things too. I was privileged to witness the musicians warming up and exchanging ideas about the song structure and those providing vocals, Chiquita Green, Janice McClain and Double Exposure, working around vocal phrasing and ideas to make the songs have a better appeal. This is their craft and they all do it very well. While this was happening Bobby was ensuring the technical side of things was addressed for a good recording in addition to answering all sorts of appropriate questions from everybody. Of course his relationship with Wah Wah's coffee, just down the road got me hooked as well - either French vanilla or hazelnut....yummy.

Now, I need to buy another hard drive to put the video footage on I have. I do not have much vocal stuff, but enough to make up a rhythm compilation like before. It will work and I need to do that in the next couple of weeks.
Posted by Carl Dixon at 12:10