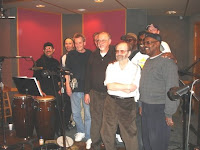 Finally, my dream was realised in Detroit, week commencing 24th March 2008. Four songs were completed at Studio A in Dearborn Heights both music and vocals:

What a fantastic studio, with very professional staff and facilities. The Steinway grand (1872) was just out of this world. What a privilege to have some of the great Detroit musicians and singers on my songs, as well as an instrument over 130 years old. It made me feel positively young. Todd Fairall, the engineer, is a delight to work with and nothing is too much trouble. He knows the equipment backwards and makes it all look so simple. He recently won an award too which we were all thrilled to hear about.

Dennis Coffey and I co produced the material and the session commenced with the rhythm tracks being recorded for the four chosen songs. I witnessed how the professionals would have crafted the same back in the 1960’s. The difference today was the recording media. The studio uses state of the art digital techniques and recording which simplify the production immensely and allows several takes to be recorded whilst the creativity in the studio is still red hot. I am familiar with the mechanics of 2” tape from my TV employment and can honestly say that today’s Pro Tools was a great ally in studio rather than the cumbersome format of 40 years ago. Yes, I have mixed feelings about this too, but I accept new technology like HD TV, mobile phones and microwaves that help enhance my life and make things easy. That debate for another day….

One of the pre requisites of the session was no synthesizers to appear on any of the tracks and indeed that is the case. Also I wanted real vibraphones and that became a reality too. Even Rob Pipho the vibe player could not believe that only the real deal on my songs would qualify! The rhythm section reads like this – Dennis Coffey co producer and guitar, Uriel Jones and Spider Webb on drums, Ray Monette on guitar, Bob Babbit on bass guitar, Robert Jones on the Steinway Grand, Dennis Sheridan and Larry Frantangelo on percussion, and all arranged by David van der Pitte. To see David’s hand written charts for my songs made me shiver. He does not believe in computers and does not have an email address. He listens to the demos and hand writes the music on proper sheet music. I hope to frame one of them because they are a work of art. On the horns we had John Trudell, George Benson, David Jennings, Ed Gooch and Mark Berger, plus great solos by George Katsakis of The Royaltones fame and Gil Bridges of Rare Earth! Rob Pipho was on vibes.
Spyder Turner and Pree supplied some terrific lead vocals and Spyders daughter, Gayle Butts helped with backing vocals too. They sound out of this world. Spyders voice is rich, mature and luscious and really uplifted the songs to another level. Pree sang her heart out and despite a cold, injected even more energy into ‘Suddenly there’s you’. I think once these songs are available, I am hoping my homage to these artists and musicians will pay off, because I am sure they capture the energy and soul of yesteryear but with a fresh and vibrant sound that could encourage others like me to do the same over there. The Detroit vibe and creative process is still alive and sounding as good as ever. It must not be ignored.

I am hoping to create a project web site to showcase everything that went on during the 3 days in the studio and hopefully some more photos and a little video footage, plus audio snippets too. Then, if anybody is interested in supporting the project or indeed further projects, simply buy the product if you like it. That way, I can put money back in the pot to create more music from these talented professionals who have helped my dream come true. I know many young and old have been very supportive to me over the last few years, with my endeavours. One Soul Source member offered to make a donation to the project, which put a tear in my eye. Clearly this person feels the same way about the creativity these people have given fans over the years. Because of that offer I decided to invite people to support the project by purchasing the product. Originally, this was a personal project and not for sale. I think it would be criminal not to pursue a route where real soul fans can at least hear the material. I hope to release one of the songs and would love to work on some radio exposure if I can. I do have a plan and if anybody has any ideas, feel free to suggest. At present I am fishing about for interest from record labels who could exploit this better than myself.

Stay tuned for updates…
Posted by Carl Dixon at 12:06